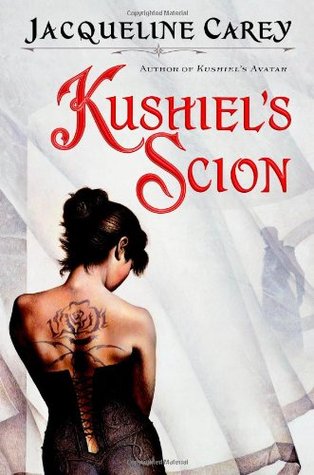 Stolen, tortured, and enslaved as a young boy, Imriel is now a Prince of the Blood, third in line for the throne in a land that revels in art, beauty, and desire. It is a court steeped in deeply laid conspiracies … and there are many who would see the young prince dead. Some despise him out of hatred for his birth mother Melisande, who nearly destroyed the realm in her quest for power. Others because they fear he has inherited his mother’s irresistible allure – and her dangerous gifts. And as he comes of age, plagued by dark yearnings, Imriel shares their fears.

At the royal court, where gossip is the chosen poison and assailants wield slander instead of swords, the young prince fights character assassins while struggling with his own innermost conflicts. But when Imriel departs to study at the famed University of Tiberium, the perils he faces turn infinitely more deadly. Searching for wisdom, he finds instead a web of manipulation, where innocent words hide sinister meanings, and your lover of last night may become your hired killer before dawn. Now a simple act of friendship will leave Imriel trapped in a besieged city where the infamous Melisande is worshiped as a goddess; where a dead man leads an army; and where the prince must face his greatest test: to find his true self.

Review: I really fell in love with the first Jacqueline Carey’s trilogy featuring the adventures of Phèdre and Joscelin. Although I was eager to get into the Imriel’s story, I waited several years to really do it and so it was with pleasure to find the characters that I had taken the time to enjoy.

I was quite surprised by starting the novel to find Imriel still quite young. We can thus see him growing and evolving throughout the chapters from childhood to adulthood. I was immediately swept away by the history, especially as we find the almost constant presence of Phedre and Joscelin behind him and it was very interesting to see what they had become. We are therefore witnessing his desire to no longer be the son of his mother, to get away from all what he could represent and afraid of what he really is. It is not necessarily easy when you know the legacy he has. But Imriel will evolve, meet with his cousins, realize that Phadre is not so white that he wanted her to be, and he will one day have to deal with his inner demons. But gradually, and even if it is very difficult, he will realize that he is different and he must fulfill his desires.

Of course the political intrigues are always there and even more due to his present line for the crown. Even if he does everything to stay away from that, not to raise suspicion, he does not take much to put him on the front of the stage again. Also, our young boy dreams of freedom and adventure although this is very complicated.

I loved to follow the whole story and I loved the fantasy world the author has created. By cons even if I was completely carried away by the first part of the novel, I admit that I have a little less adhered to the second featuring our hero in another part of the kingdom and his adventures all alone. Then, this is not really a concern but it’s true that how I felt, but I’m curious to see what will happen now, because I’m sure it will not fail to have many outstanding events. I’m also curious to see what will happen to everything related to Melisande we hear so much about here.

A very good book and I can not wait to immerse myself in the sequel.