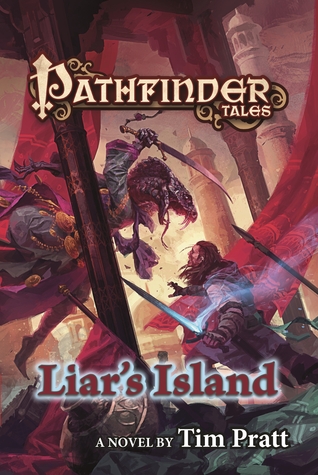 In the the tradition of Fafhrd and the Gray Mouser (if one were a talking magical sword) Rodrick and his blade Hrym are accomplished con artists and occasional adventurers—as long as it means easy money. When they get called to the court of an exotic southern island, they become pawns in a dangerous game of political intrigue. The only way to survive is to locate and “liberate” a legendary artifact.

Review: This book is part of a series of novels based on the roleplaying gamePathfinder.

I haven’t played Pathfinder, but played a lot of Dungeons & Dragons, and read my fair share of novels based on roleplaying games, so I was sure any knowledge of the setting wasn’t necessary.

And indeed: This story is easy to follow without any knowledge of the world (or roleplaying in general), and even without having read Liar’s Blade, an earlier Pathfinder novel that also features Rodrick and Hrym.

The story begins in the middle of action and soon you get a feel of Rodrick and Hrym. I must say there were no surprises there: Charming rogue with a snarky talking sword. Been there, done that. Anyone who has read some Fantasy novels, or has played a Fantasy RPG will be familiar with this trope.

But I can’t say I minded: Rodrick and Hrym are a fun pair of unlikely heroes to read about. After an action packed introduction, the story slows down a bit to set up the main plot, but it never gets dull. And once Rodrick and Hrym manage to get themselves in trouble, the action starts up again and they have to be resourceful to stay alive.

As with many Fantasy settings, the Pathfinder world borrows heavily from mythology, in this case both from Eastern and Norse mythology that I noticed, and I might have missed some references. Again: this is not a bad thing. It makes for interesting world building, and certain elements of the story being familiar, makes that you can easily picture the setting and the people and creatures Rodrick and Hrym encounter.

Overall this is fun and very enjoyable read. I can advice this book to anyone who likes an entertaining Fantasy romp. I might give Liar’s Blade a try if I come across it. I will also investigate what other books Pratt has written.