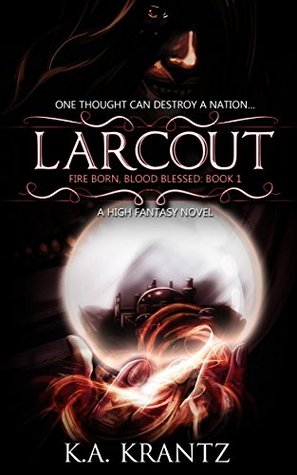 Synopsis: Blood-beings can be chattel or char.

Fire seethes through the veins of every Morsam, demanding domination and destruction. Combat is a hobby. Slaughtering the inferior blood-beings is entertainment. Life is a repetitious cycle in the prison fashioned by the gods. But mix-race abomination Vadrigyn os Harlo suspects the key to freedom lies with safeguarding the blood-beings; until her blood-born mother uses foreign magic to turn the Morsam against Vadrigyn. Betrayed, bound, and broken, Vadrigyn struggles against the dying of her essential fire. Yet the ebbing flames unleash the dormant magic of her mixed heritage…

The magic to destroy free will.

Seized by the gods and dumped in the desert nation of Larcout to stop history from repeating, Vadrigyn discovers her mother’s legacy of treason and slaughter still festers. To survive the intrigues of the royal court, the roiling undercurrents of civil war, and the gods themselves, Vadrigyn must unravel the conspiracy behind her mother’s banishment. But manipulating free will unleashes a torrent of consequences.

If she fails the gods, she will return to the Morsam prison, stripped of all magic and all hope.

If she succeeds, she can rule a nation.

Review: This is a really cool Fantasy read.

Vadrigyn is an unusual, but great heroine. She’s without guile and used to using her strength and the poisonous parasites that live in her body to survive. But then she is taken from the kill or be killed world she grew up in and lands in a world where intrigue and deceit are the weapons of choice. She has to learn how to find her place in this world to keep alive.

I love the world building in this book. The different Gods and races are really interesting and intriguing. This book focuses most on the Larcoutians and the Morsam, but the glimpses that were given of the other races were really cool as well. I hope there will be more of them in the next book.

The magic that is used by the Larcoutians and how their society deals with that magic is well worked out and believable. Their society is a scary and brutal one beneath the civilized surface in my opinion. I enjoyed how you slowly find out more and more about Larcout.

The story is complex and the secrets Vadrigyn is trying to uncover are dangerous. I was hooked from the start and kept trying to figure out what was going on and who was to trust. There were some really likeable characters, and some that I loathed. At times I was really nervous about the safety of my favorite characters.

The names that are used aren’t common names and took some getting used to, but they were all different enough that I didn’t have to track back to figure out who’s who, like sometimes happens when an author uses names that sound too much alike.

All in all this is a really great Fantasy read, filled with conspiracies and cool action. I’m looking forward to reading the next book, to see what happens next for Vadrigyn.

Why should you read it:
It’s a cool and very enjoyable Fantasy read.

9 thoughts on “Larcout by K.A. Krantz”