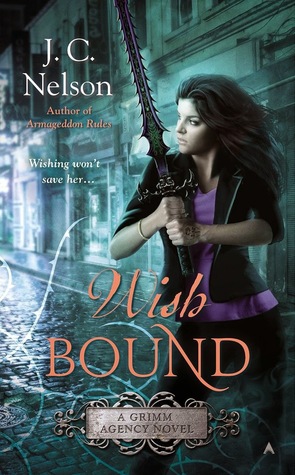 Synopsis: As a partner at Grimm’s magical Agency, Marissa Locks is used to working odd jobs. But when an evil queen reappears in Kingdom, life becomes too strange to handle…

Review: I had a good time with the first and second volume and I think that the author had managed to bring perfectly many lovely ideas in his books. It’s always very interesting to see the characters from fairy tales like princesses, queen, princes, goblins and fairy godfather that we all know, in our world today.

Marissa does not really have any luck and each volume proves it perfectly. Once again, our heroine will have to face many obstacles. Oh yes, from her birthday that brings a lot of disasters, Isolde who appears much faster than expected and who is determined to take M. as her servant whatever she wants it or not. In addition, some queen and her son are back in history to destroy the life of our agent. A lot of stuff, is not it? And it is far from over because Marissa is going to have to make many choices whose consequences will likely be very difficult.

Our heroine has evolved considerably since the first novel, but I confess that I did not expect to see so many things here. We discover many revelations which we certainly can not expect and I was surprised more than once I confess. I’m not going to go into the details of the novel as it would be easy to tell you everything taking place and it is not really the goal, but we are left in a race against time where we hope everything will end well.

I do not know if this is the last volume of the series, I admit, but we have a good conclusion there and I had a great time with the whole story. As always we find the characters that we have learned to discover in the novels. Ari and her change into a real witch, the meeting with the famous Isolde, Liam and his dragon status or Grimm and the secrets he hides from everyone.

So yes I had once again a great time with this third installment and I would recommend the series if you want something a little different.