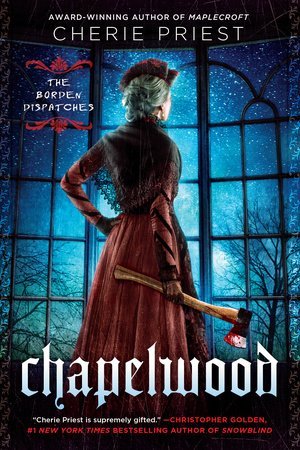 Synopsis: Birmingham, Alabama is infested with malevolence. Prejudice and hatred have consumed the minds and hearts of its populace. A murderer, unimaginatively named “Harry the Hacker” by the press, has been carving up citizens with a hatchet. And from the church known as Chapelwood, an unholy gospel is being spread by a sect that worships dark gods from beyond the heavens.

This darkness calls to Lizzie Borden. It is reminiscent of an evil she had dared hoped was extinguished. The parishioners of Chapelwood plan to sacrifice a young woman to summon beings never meant to share reality with humanity. An apocalypse will follow in their wake which will scorch the earth of all life.

Unless she stops it…

Review: I liked the first volume as it introduced many interesting ideas and I was curious to discover this second novel. I must say that I enjoyed this volume a little more than the last one, which was a pleasant surprise.

20 years have passed since the end of the previous novel and Lizzie is more alone than ever in her mansion. Nance has disappeared without a trace, Emma is gone as well as well as the dear doctor we had learned to get to know. Everyone thinks she’s a witch and her life continues in solitude. Yet an unexpected character will return to her life by a phone call, the detective Wolf. Indeed, it seems that something strange is happening in Birmingham. A murderer with an axe rages like a distant memory without anyone understanding the motivations and an exhibit seems to show a portrait of Nance. Could Lizzie finally understand what happened to her half? But that’s not all because it is the story of a young woman, Ruth, who left the sect in which she was enclosed to marry and therefore flee her father, the one who killed the priest who helped her. Elizatbeth finally thought she would have the answers to her questions, but these are only amplified when she teams up with Wolf to help the young woman and tries to understand what is happening here.

I admit that I was very surprised by the ideas of the story, it was very interesting to see the references to the Ku Klux Klan, or even the sects and I was curious to see how everything would evolve. Lizzie has not changed much over the years but it is quite sad to see the person she has become … I do not know if we will have more novels in the series but it’s true that I’m curious see what might happen now. Our heroes must go through many hurdles here and it will be difficult for them to manage what they want to do. Besides, I enjoyed the passages with our heroine, I found that her chapters were the most touching, always written in the form of a letter to Emma. It really helps to more easily share all her feelings.

As you can see, I had a good time with the story and I’m curious to have more.

35 thoughts on “Chapelwood by Cherie Priest”