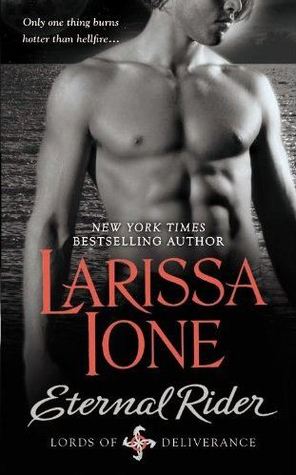 Synopsis: They are here. They ride. The Four Horsemen of the Apocalypse.

His name is Ares, and the fate of mankind rests on his powerful shoulders. If he falls to the forces of evil, the world falls too. As one of the Four Horsemen of the Apocalypse, he is far stronger than any mortal, but even he cannot fight his destiny forever. Not when his own brother plots against him.

Yet there is one last hope. Gifted in a way other humans can’t-or won’t-understand, Cara Thornhart is the key to both this Horseman’s safety and his doom. But involving Cara will prove treacherous, even beyond the maddening, dangerous desire that seizes them the moment they meet. For staving off eternal darkness could have a staggering cost: Cara’s life.

We follow here War, a man who is destined like his brothers and her sister to bring the Apocalypse on earth. Each needs to protect or to avoid a certain act in order to stay as they are and not to turn into a kind of demon who wants to dive the land into chaos. This future hangs over their heads constantly, placing them in difficult situations. It must be said that since their brother Pestilence went on the wrong side of the force, and remains determined to make them all fall down with him. They therefore remain on the alert at all time. To continue to live his life, War must protect the person wearing the aegis, but this thing is now found in a young woman Cara, human, unlike the previous ones. The problem is that in a human, the gift accelerates the death of the host. And when the two begin to succumb to their attraction, many problems will arise. But in addition to this, the young woman is tied to a dog of hell, a dog whose family killed War’s relatives… something that our hero is not going to really enjoy. Something else? Pestilence will never cease to try to kill the woman whatever may happen … But Cara is not an ordinary person, oh no, because she has exceptional faculties we discover throughout the history.

I enjoyed this story. Larissa Ione inserted in this novel many ideas. Oh yes, because she has created a mythology for these horsemen and I found it all very intriguing. It’s always fascinating to see how the authors shape the stories we know and I found this one very successful. We learn to discover with pleasure Cara and War, two different people and yet perfect together. It was interesting to see them grow together, getting to know each other and to become attached to them gradually. We can only melt for the puppy of hell and I’m curious to see what will happen for him now. So yes a lot here and everything was very catchy.

It was a very good novel, a battle between good and evil that is far from over and I’m curious to read the other volumes featuring the characters.