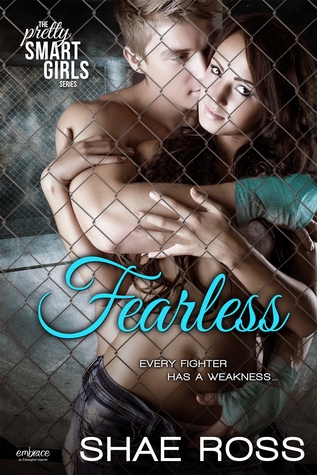 Synopsis: Every fighter has a weakness…

Devi Dalton won’t let anyone hold her back. With the help of her friends, she’s taken control of her future and traded her messed-up family life for a new job in Manhattan. Her only obstacle? Ben Winslow, the sexy friend she’s desperately trying to resist. If she’s going to succeed, she can’t afford to be distracted, no matter how hot the chemistry burns between them.

Cage fighter Ben spent six months trying to convince Devi to take a chance on a relationship. Now that they’ve reunited in New York, he’s not letting her push him away again. They’re more than friends-always have been-and he’ll do whatever it takes to prove it to her. First, he has a few demons of his own to slay…one of which could ruin his chances with her for forever.

But every fighter has a weakness. Ben’s is Devi. And this time, she’ll need more than just her favorite “Fearless Red” lipstick to protect her heart if she lets him in…

Review: This book can be read independently from the first volume. There is a point at the beginning of the book that allows us to know that Devi and Ben met at a competition. Devi, Ryan and Jade faced Ben, Jett and Vaughn. The competition has materialized the romance between Ryan and Jett, but between Devi and Ben that does not change because Devi prefers to remain at the stage of friendship.

Six months after this famous competition, they are all graduated: Ben, Jett and Vaughn have a job in New York, Ryan comes into law school in the same city. Each boy has an apartment with their job, and Jett and Ben decide to share one to be able to sublet the third to Ryan and Devi. Like that, she will be able to look for work and thus make a fresh start. Ben will enjoy this proximity and approach Devi to convince her to give a chance to their relationship.

The English summary is misleading because it says that Ben is a “cage fighter”, and no, this is not the case. He works in a company and one evening he decides to make a fight as an amateur.

This book is really successful. I liked to find Ryan and Jett again and to discover Devi and Ben. It is more intense than the first volume in terms of preliminary, the sex scenes are simple and fast. The humor is very present, the competitive spirit is always present between boys and girls and we have some very funny scenes. Finally, I have a big crush on Gator that we discover at Devi’s work.

11 thoughts on “Fearless by Shae Ross”