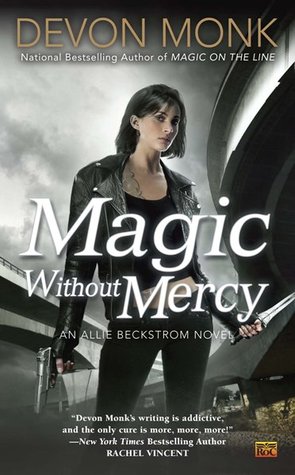 Allison Beckstrom’s talent for tracking spells has put her up against some of the darkest elements in the world of magic, but she’s never faced anything like this.

Magic itself has been poisoned, and Allie’s undead father may have left the only cure in the hands of a madman. Hunted by the Authority–the secret council that enforces magic’s laws–wanted by the police, and unable to use magic, she’s got to find the cure before the sickness spreads beyond any power to stop it.

But when a Death magic user seeks to destroy the only antidote, Allie and her fellow renegades must stand and fight to defend the innocent and save all magic….

Review: I’m a big fan of this series since the beginning so I’m always really happy to get into each new Allie Beckstrom’s adventure. Devon Monk had made an impressive work since her debut for the world, characters and plot. You might think that the story gets less interesting over the volumes, but this is not the case, oh no, quite the contrary. The seventh volume was beginning many great things that I knew would be detailed in this eighth volume. And as I was right about that!

Many things happen in this book and there is no risk of getting bored for a second. Allie runs everywhere, pursued by all, hunted as a vulgar criminal, but nothing can detract her from her purpose and this means to find a remedy for the evil that affects the magic of her city.

Shame is the person that I preferred in this volume, how could it be otherwise? He is sarcastic at all times, loving, boring and always there to help our heroine (some wonderful qualities). He was very present throughout the story to our delight, as each character of Volume 7. Unlike the other volumes though, the relationship between Allie and Zay is back in the background, but it is also nice to find out more about all the other players.

I was really surprised by some twists and turns. I must say that some events have completely broken my heart. In fact, I was quite afraid of some throughout the chapters. I think that everyone who has read the book will know what I mean about that. The war being there, this volume is not really happy, and we see that for every good news there is always something terrible behind. So we have a lot of sad moments, a lot of thoughts about what is going to happen, what will happen and how our heroes would be able to handle it all.

I think you’ll understand that I was totally overwhelmed by the volume (as always). I learned that the next book is the last. But how will I do that? We must have an end to everything but I really love this series and it will be really difficult to read the 9th volume while knowing that it will be the end. I still can not wait to throw myself in as the end of the 8th is just terrible. Yes, yes, it’s true, the story ends suddenly, letting us wanting for more.

I think the thing I look the most now is the confrontation between our characters and our two great villains of the story. I feel that it will be epic, something not to be missed.

21 thoughts on “Magic Without Mercy by Devon Monk”