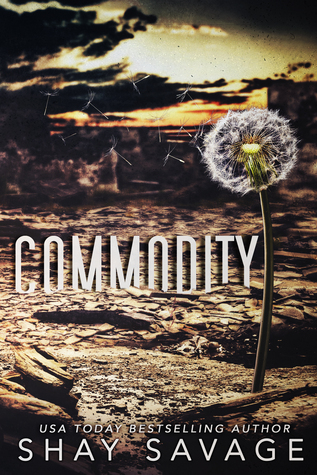 Synopsis: A woman hunted by human traffickers.
A hot and dangerous bodyguard.
Complete destruction.
The end of civilization.
The beginning of a new form of currency.
Women are now the highest COMMODITY.

Review: Commodity is a dark romance with not joyful themes such as rape, slavery… It is divided into two parts, the first part is told from the perspective of the heroine, Hannah Savinski, and the second by Falk Eckhart her bodyguard.

Hannah discovers a human traffic and is kidnapped and raped by the man who runs this traffic and his cronies. She managed to escape and is now on her way to testify. She is threatened by this very powerful man. Falk is there to protect her, and when he heard about the explosions, he takes her in an underground tunnel. When they emerge, they realize that men are killed and women and children disappeared. There are few survivors (only those who could shelter underground) and the majority are men. Falk, having an apartment in the city where they are now, decides to take Hannah. Falk and meet other survivors and everyone settles in Falk building.

There are several things that caused me problems but warning: Spoilers!

– Hannah is then kidnapped and raped (again) for 7 months but the psychological trauma disappears almost immediately! WTF?

– That the attack was due to the aliens, why not… but the discussion of Falk with one of them at the end, no just no !!

I will conclude with a warning, this book talks about rape. Consider your prior sensitivity before choosing to read it or not.

12 thoughts on “Commodity by Shay Savage”