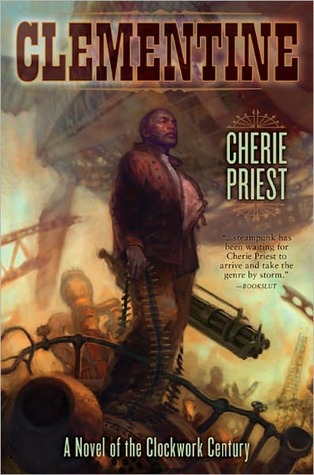 Synopsis: Maria Isabella Boyd’s success as a Confederate spy has made her too famous for further espionage work, and now her employment options are slim. Exiled, widowed, and on the brink of poverty…she reluctantly goes to work for the Pinkerton National Detective Agency in Chicago.

Adding insult to injury, her first big assignment is commissioned by the Union Army. In short, a federally sponsored transport dirigible is being violently pursued across the Rockies and Uncle Sam isn’t pleased. The Clementine is carrying a top secret load of military essentials–essentials which must be delivered to Louisville, Kentucky, without delay.

Intelligence suggests that the unrelenting pursuer is a runaway slave who’s been wanted by authorities on both sides of the Mason-Dixon for fifteen years. In that time, Captain Croggon Beauregard Hainey has felonied his way back and forth across the continent, leaving a trail of broken banks, stolen war machines, and illegally distributed weaponry from sea to shining sea.

And now it s Maria’s job to go get him.

He’s dangerous quarry and she’s a dangerous woman, but when forces conspire against them both, they take a chance and form an alliance. She joins his crew, and he uses her connections. She follows his orders. He takes her advice.

And somebody, somewhere, is going to rue the day he crossed either one of them.

Review: This novel is considered in France as the second volume of the Clockwork Century series and presents a novella, but it is placed between Volume 1 and 2 abroad in the US. That said, I did not notice it at first and I was surprised by the thickness of the book when I received it.

We follow the first story and meet with other characters that we had the chance to discover before. Indeed, his ship stolen, the captain Hainey is determined to reclaim his own whatever the cost! Yet he did not expect that so many persons would try to prevent him from that, starting by Maria Boyd, a spy, sent to immobilize him.

It was interesting to see the determination of Hainey regarding his ship but also to see the loyalty of Maria tested and finally to attend to an unusual alliance. I have not been as carried away as with the first volume but I had a great time with this little story. It was very interesting and fascinating to see one more time the Cherie Priest universe.

27 thoughts on “Clementine by Cherie Priest”