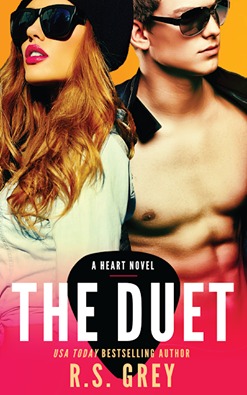 Synopsis: When 27-year-old pop sensation Brooklyn Heart steps in front of a microphone, her love songs enchant audiences worldwide. But when it comes to her own love life, the only spell she’s under is a dry one.

So when her label slots her for a Grammy performance with the sexy and soulful Jason Monroe, she can’t help but entertain certain fantasies… those in which her G-string gets more play than her guitars’.

Only one problem. Jason is a lyrical lone wolf that isn’t happy about sharing the stage—nor his ranch—with the sassy singer. But while it may seem like a song entitled ‘Jason Monroe Is an Arrogant Ho’ basically writes itself, their label and their millions of fans are expecting recording gold…

Review : I continue to discover RS Grey novels with The Duet. I do not necessarily read a lot of romances in the world of music, this is not the theme that attracts me the most, but I was curious to discover this story.

Jason and Brooklyn are two well-known singers of the same label, yet they have never crossed paths and their music is very different. But now, they both have the chance to perform at the Grammy’s and their superiors have decided that it would be extremely profitable to make a duet of the two stars. Although the idea does not convince much Brook, Jason is completely opposed to that. So you suspect that the young woman is pretty upset. Having no choice at all, Brooklyn joins Jason on his ranch in Montana, but she did not expect everything to go so bad. They constantly quarrel and hate each other … and yet …

I had a great time with the novel and it’s true that I did not necessarily expect the turn at the end of the story. Jason is hard to pin down and it’s true that we do not understand exactly what he wants. He blows hot and cold constantly. This is also why it is easy to become attached to Brook, to understand her doubts, her sadness and her hopes. This is not a simple situation. We also discover her younger sister Cammie who is just like her a person I had a lot of fun to know. I am also curious to discover her story now. I feel like it is going to be epic, and that will allow me to learn more about Grayson, a friend of Brook, at the same time.