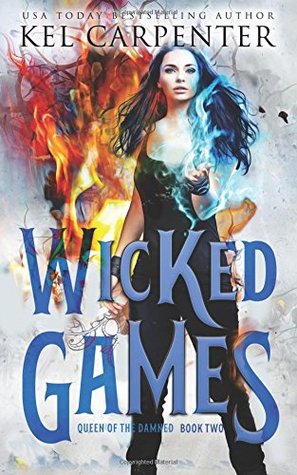 Queen of the Damned, Book 2

Synopsis: So…as it turns out, I really am Lucifer’s Daughter. Hell’s Heir. And—you guessed it—the next Queen of the Damned.

But what if I don’t want to rule?

With the imp in hiding, and Josh gone from this world, I still wasn’t safe. Not by a long shot. Dear ol’ Dad didn’t just pass on his legacy and mark. He also passed on all of Hell’s problems, and that means his enemies, are now mine.

Fortunately for me, I have the Four Horsemen, my banshee best friend, and a pissed off raccoon on my side.

But now I have the beast to contend with. My psychotic, possessive, and downright scary alter-ego was dead set on having the Horsemen, not only at my back, but in my bed. As if learning to control the flames of Hell wasn’t a hard enough job by itself.

Would it have been too hard for Lucifer to write a handbook before he died?

Review: I’m not really a fan of reverse harem, but as I had a good time with the first volume despite a few small dots, I was curious to get into this sequel and find out what the author had in store for Ruby and her friends.

Now that Lucifer’s mark has appeared on Ruby, she has to deal with the consequences. She now has enemies she didn’t have before, and a beast inside her that she struggle to deal with. She hasn’t gone through her transition yet, but it won’t be long now. Things go from bad to worse when Kendall decides to make our heroine’s life a living hell, convinced that Ruby killed Josh. And she’s willing to do anything to prove it to everyone!

Of course, the four horsemen continue to fight for the young woman’s attention, but that’s also why the novel is a reverse harem. I must admit that the four men are quite intriguing.

It was a rather nice sequel. I will be curious to read the sequel.