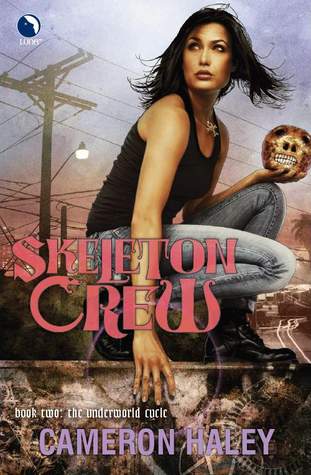 Synopsis: Bodies are hitting the pavement in L.A. like they always do, but this time they’re getting right back up, death be damned. My mobbed-up outfit of magicians may be the strongest in the city, but even they aren’t immune to the living dead.

And I’ve yet to develop a resistance to Adan Rashan.

If I don’t team up with the boss’s son, we won’t just be at each other’s throats over control of the outfit. We’ll be craving hearts and brains, as well.

Because as long as this nasty spirit from the Between is stopping souls from finding peace, I’m facing the biggest supernatural crisis to ever hit the City of Angels.

Zombies, it’s time you feared me.

Review: I read the first volume a long time ago and I really enjoyed it. I must say that Domino doesn’t have an easy life. I was immediately attracted this time by the synopsis featuring zombies. We do not expect it at all after finishing the first novel. But what a nice surprise! I have not read a lot of novels about zombies but it was a good opportunity to read this one.

Domino will not have the time to get bored in this new volume. Indeed, in addition to her is regular work, some very strange events occur. A lot of persons are dying to finally become a zombie. The concern? Like all living dead, they want only one thing, food. But they are far from being idiots and some do not even realize they are dead before feeling this strange hunger. No, a person bitten by one of these creatures does not become one, but it does not take much for a human to perish and so to be turned. It’s the reason why the number of zombies increases continuously, and nobody knows what will happen to the city in the end. But our heroine is determined to find a solution and to combine all the people who can help her to achieve this goal. But everyone has an idea in mind and that is always a bit difficult to know what it is exactly.

It was a very good zombie novel, I loved the idea and the reason behind this change. I must say that I did not expect to have such a cause. All the characters in the first volume are here for us, except for Dominica’s boss, and I really enjoyed meeting the mother of our heroine. I always find it interesting to be on the bad guy side and not on the nice one as it is usually the case in the books. Well, all this is very subjective when we see how they behave. But as in the first novel, we perfectly feel the power struggles and the mafioso side of each Boss. Domino must manage more than she can actually do but it is actually her work. She must also deal with the real Adan and her feelings (which is quite complicated by the way). I admit that I was looking forward to see what would happen between them, everything is so ambiguous throughout the story, but I loved to see them together. Honey is also a character that I enjoyed, she is always there for Domino and is much more formidable and redoubtable than we might think.

However, I admit that I was very surprised at the end and it broke my heart to see that the events were ending like that. But it also adds more logic and reality to the story, because the world is not always white, and shades of gray always appear. Dominica is a strong and courageous woman, this volume shows us the meaning perfectly. A very good second novel and I sincerely hope that there will be a third (if someone knows something about that…), as I look forward to following her adventures.