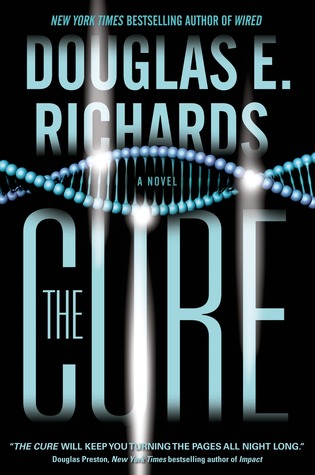 Synopsis: Psychopaths cause untold misery. If you found the cure for this condition, just how far would you go to use it?

Erin Palmer had a devastating encounter with a psychopath as a child. Now a grad student and scientist, she’s devoting her life to studying these monsters. When her research catches the attention of Hugh Raborn, a brilliant neuroscientist who claims to have isolated the genes responsible for psychopathic behavior, Erin realizes it may be possible to reverse the condition, restoring souls to psychopaths. But to do so, she’ll not only have to operate outside the law, but violate her most cherished ethical principles…

Review: I didn’t know the author Douglas E. Richards and I confess that I was very intrigued by his book. However it’s the first time I read a techno thriller and unfortunately I wasn’t completely enthralled by The Cure although the subject was interesting but I’ll talk about this point later.

The first thing that bothered me was the synopsis which was really too long with spoilers, making the story fairly predictable despite the presence of many twists and turns. So if you want to fully enjoy this book, do not read the whole synopsis on Goodreads. 😉

Erin is a young woman who lives with a heavy past as a child. Her entire family was killed in front of her by a psychopath. We see this terrible event in the prologue and I must say that I found this scène pretty hard although it was necessary to better understand Erin’s personality and her actions. Now she’s a brilliant graduated student and a scientist. She devotes her life to studying psychopaths in a prison in Arizona. Her research catches the attention of a certain Hugh Raborn a neuroscientist working for an important pharmaceutical company. However he is not the only one. In fact, other people seem very interested in her research and she will find herself in a situation that transcends all that she could have imagined.

What is amazing in this novel is the fact that Erin is really resourceful to the point that the portrait the author draws of her is not very credible. She is very beautiful, very intelligent, she has made brilliant scientific studies and she knows very well how to defend herself. It is true that her past has heavily influenced her career and made her stronger but she does not really look like a scientist. She is a tough girl, good at martial arts and self-defense techniques. During almost the entire novel she reminds me more a heroine of spy movie or a private detective rather than a scientist. At the beginning she is a determined woman who wants to finish her research at all costs. But gradually she questions herself about everything she has done so far and the eventual consequences it might result. Then two men are determined to get the combination she found to cure psychopathy. In whom should she trust? Will she manage to discover the truth hidden behind all this mess?

The novel is divided into two main parts. The first one focuses on Erin while the second focuses more on the other characters. We find out some things about these other protagonists as well as the ins and outs of the story thanks to the flashbacks. I liked the first half of the novel about psychopathy. It was really interesting to discover all these details about this condition. The strong point of this book is that it leads us to ask ourselves many ethics and moral questions and I found it really captivating. However I didn’t connect with the second half of the book, the sci-fi part. It’s unfortunate because the entire first half was a gripping psychological thriller with ultra-modern and spy gadgets and then suddenly it switches to another dimension and we are left with an alien story not very clear. I was perturbed by this sudden change and I confess that I would have preferred to read a story limited to a single genre rather than both. I think I would have enjoyed The Cure more if it was a 100% thriller because I wasn’t really captivated by the entire sci-fi thing, especially the explanations given at the end of the book.

Nevertheless it was an enjoyable read and the subject was very interesting.

12 thoughts on “The Cure by Douglas E. Richards”