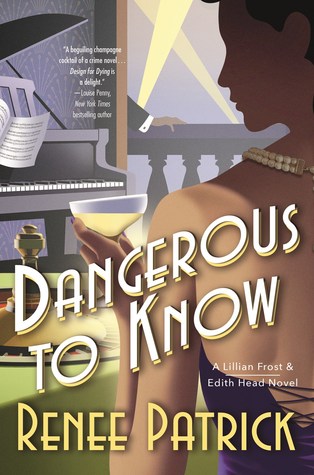 December 1938. Lillian Frost has plunged head first into a world of boldfaced names and endless glamour as social secretary to movie-mad millionaire Addison Rice. Costume designer Edith Head is now in charge of Paramount Pictures’ wardrobe department, although her position is precarious: potential replacements are being auditioned on a regular basis. The two friends again become partners thanks to an international scandal: a real-life incident, a historical footnot long forgotten, in which the war clouds gathering over Europe cast a shadow on Hollywood.

At a swanky Manhattan dinner party the well-heeled guests speak ill of Adolf Hitler in front of a German maid with Nazi sympathies. The secrets she spills soon have all of New York society running for cover–and two of Paramount’s biggest stars, Jack Benny and George Burns, facing smuggling charges.

When an émigré composer seeking work at Paramount is found dead, Marlene Dietrich tells Edith she blames agents of the Reich. As Lillian and Edith unravel intrigue that extends from Paramount’s fabled Bronson Gate to FDR’s Oval Office, only one thing is certain: they’ll do it in style.

Review: I had a great time with the first volume. Lillian’s investigations are interesting and full of twists and turns. Besides, our heroine has to face a new problem. Indeed, Marlene Dietrich is looking for one of her old friends, a German emigrant, whom she wants to hire for his talents as a pianist. But it seems that he has disappeared.

In a background of World War II, or at least with the echoes of the Nazism in Hollywood, Lillian will set foot in a story that surpasses her. Between American spies and Nazi spies, our heroine will not know where to turn to. With the war approaching rapidly, no one knows what to think and the population is quietly deciding. Lillian’s adventures will lead her to meet many characters and when she discovers the body of the man she was looking for, she will realize that others wanted to find him. Monitored by all, our heroine will try to disentangle the true from the false with the help of her friends.

During this investigation, she will cross the road of a driver: Simon. He is an enigmatic man, hard to pin down and of whom it will be difficult to know on which side he is. I really enjoyed seeing his interactions with Lillian and I confess that I am curious to see what the sequel will bring us. Of course, there is Gene too, but it’s also difficult to decide on him. His relationship with Lillian is quite strange and complicated.

In any case, I had a great time once again with this story and I hope that we will have more because I am curious to discover a new investigation!

22 thoughts on “Dangerous to Know by Renee Patrick”