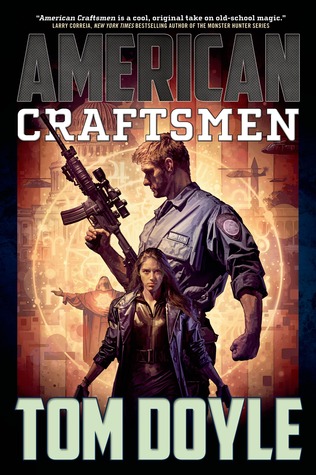 Synopsis: In modern America, two soldiers will fight their way through the magical legacies of Poe and Hawthorne to destroy an undying evil—if they don’t kill each other first.

US Army Captain Dale Morton is a magician soldier—a “craftsman.” After a black-ops mission gone wrong, Dale is cursed by a Persian sorcerer and haunted by his good and evil ancestors. Major Michael Endicott, a Puritan craftsman, finds gruesome evidence that the evil Mortons, formerly led by the twins Roderick and Madeline, have returned, and that Dale might be one of them.
Dale uncovers treason in the Pentagon’s highest covert ranks. He hunts for his enemies before they can murder him and Scherie, a new friend who knows nothing of his magic.
Endicott pursues Dale, divided between his duty to capture a rogue soldier and his desire to protect Dale from his would-be assassins. They will discover that the demonic horrors that have corrupted American magic are not bound by family or even death itself.
In Tom Doyle’s thrilling debut, American Craftsmen, Seal Team Six meets ancient magic–with the fate of the United States hanging in the balance . . .

Review: I did not know anything about Tom Doyle or his novels, and it’s true that I usually avoid books that are more or less connected with the army, but the synopsis immediately intrigued me when I read it. I was therefore curious to see how the story would be. I must say that in the end I really had a good time with the novel.

Dale Morton went through many hardships in his life, and his last mission proved to be a total failure. Being cursed and hoping to leave the army, he finds himself with a large number of enemies at his heels. And while he did not know who wants him dead, he will have to embark on a quest to find the culprits. On his way he meets Scherie, a young woman out of the ordinary and who will be present for him in all circumstances. And it could also be that this woman turns out to be much more than what people thought, starting with Dale. As they try to survive together, an enemy approaches increasingly trying to eliminate all opposition.

The story of our two heroes was really interesting and I loved the author’s ideas about these Craftsmen, holding all these extraordinary gifts. The only thing that bothered me a bit is the sudden change of point of view for the characters. It was sometimes quite difficult to see the changes of people and to understand where we were heading. But this is just a detail and I enjoyed seeing all the characters. Dale and Scherie form a perfect duo together and they are desperate to complete their quest. They will also learn a lot about each other this way. But we also meet the ghosts of the Dale’s father and grandfather, two really interesting characters. It was very funny to see them together arguing constantly, and yet in the end, they may well be that they are surprised by the evolution of their relationship.

This novel was a nice surprise and perfectly combines magic, conspiracies and investigation. A surprise a little different from the books I usually read.