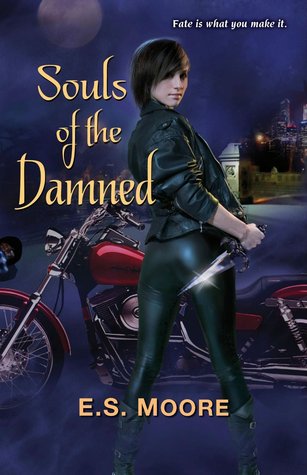 Synopsis: Innocence is relative, and evil is damned hard to kill. . .

Kat Redding would love to take a break from the gruesome, dangerous work of hunting down rogue vampires and werewolves, battling for innocent lives. But there’s no peace for Lady Death. Until Kat’s young charge, Sienna, appears on her doorstep, escaped from the shadow-paradise of Delai. Sienna is weak, confused, desperate–human in the utmost. If Kat is going to have any hope of breaking the hold of Delai, she’ll have to infiltrate the walls around the false sanctuary. And the only way she can do that is to trade in her battle-hardened, bloodthirsty vampire’s body–for Sienna’s human form.

With no weapons but her wits, Kat has to trust a demon, defeat an angel, and wrestle with her own rebel soul–because with all the fear and death she’s conquered, no one has ever offered her another day under a warm yellow sun. . .

Review: The end of the previous volume left us with a huge cliffy and it is true that I was pretty excited to be able to know what would happen. Oh yes, because the cult was destroyed and Jonathan, Kiera and Nathan had left our beloved Kat behind. How not to be curious?

So we find our heroine in a rather difficult time. For weeks she hoped to hear from Jonathan or learn about his return, but nothing happens. But if only she could spend days or rather her evenings to look for him but it’s not the case, because now other problems occur, completely shattering her world. Adrian returns to the front of the stage reminding her that he is still there, her vampire boss leaves her a month to put her affairs in order to enter fully into her service but there is so much more. Oh yes, because Sienna, the girl she abandoned in Dalai, appears before her door, asking for help. And nothing will stop the young woman to save her. Yet it may well be that to save her, she must once again be placed in the hands of a demon. Taking the place of Sienna will not be easy and finding a way to defeat Levi even less.

I admit that I was very curious to find out how Jonathan was doing and I admit that I was quite surprised to see what had happened meanwhile. His story touches us and I was really sad for him. But it is true that I have some trouble to understand why the two stayed away from each other this way … And then there is Sienna. I do not know why but I always imagine this character really young because of her naivety, but I finally realized that she was older than that, and I would have liked to see her a little more assertive and mature. Yet it is still very interesting to learn more about her and even though I’m not really sure of the early relationship between her and Ethan, I found very cute how they behaved together. Some information is given at the end of the novel about a young woman and it is true that we also have a lot of questions. I am very curious to know the answers I must say. I was also quite surprised to see that the history of Delay ended here, I did not really expect that and even though I thought everything was perhaps too rushed, I was happy to understand a little more about all that.

We still have many things to discover, and the interest of all the characters to Kat really intrigues us. I am very curious to find out more because new things are primed and I wonder how E.S. Moore will conduct his history. In any case, I once again enjoyed the new novel that closes a part of the plot that we know.

20 thoughts on “Souls of the Damned by E.S. Moore”