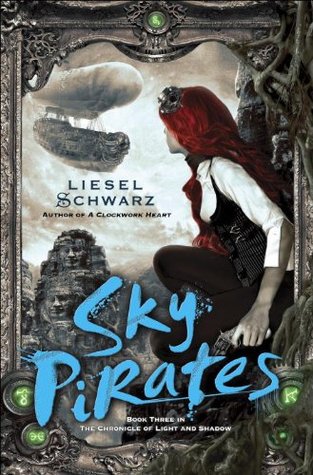 The Chronicles of Light and Shadow, Book 3

With her husband, Hugh Marsh, missing in the netherworld and presumed dead, Elle Chance loses herself in the task at hand: piloting the airship Water Lily on commissions across the globe. But as it turns out, her beloved is very much alive—the once-powerful warlock reduced to a wraith. When Water Lily is threatened by pirates, Elle will have to channel all her power as the Oracle—the keeper of the barrier between the two Realms—to try to save what she loves most. As the dark forces of Shadow converge around her, Elle must find a way to breach the curse that binds Marsh. But once released, will Marsh return to her—or is their love destined to die so that he can live?

Review: The first two novels in the series were both great and I was curious about this third installment. Well I must say that I do not remember a lot of things about the end of the previous volume, and I was a little anxious at the beginning of the story, however, everything finally came back pretty fast.

The end of the previous volume had left Elle and Hugh in a rather delicate situation. Oh yes, because Hugh has disappeared without a trace and Chance must now try to find out what she wants to do with her life. But our heroine is not a woman to be pushed and while returning from a mission with an archaeologist, they are both attacked by Logan Dashwood, a character previously discovered and who is determined to teach her a lesson. But nothing goes as planned and the doctor is killed as well as some crew members. Enclosed by Logan on his airship, Elle will have no choice but to agree to participate in the life of the crew while waiting to find a way to escape. But it’s not only that because a hellhound is after her, a price is on her head, and Patrice is determined to recover her whatever it might cost. But Elle has a mission, and she wants to find a lost temple to find the solution that can save her husband. But nothing will happen as planned, and Logan could also complicate matters.

I had a great time with the novel. It’s pretty sad to see the situation in which Elle is found. She does not know how to handle everything and whatever she does, people around her die and the situation only gets worse each time. But her purpose is well defined and whatever happens it is essential that she reaches her answers. Yet it also hurt my heart to see that she is lost in her life, she does not know what she will become and has the impression of having already lost everything. We do not see a lot Hugh here, even if he made ​​a few appearances but it certainly that he still cares about the young woman and hopes she will leave him behind. And then we have … Logan, the captain pirate who kidnaps her. Ah, it’s difficult at first to appreciate him and yet he takes a place in our heart gradually. Despite his status as a pirate, he is courageous, fair and always tries to do the best. He knows that our heroine is a walking danger, but he will always be there for her, even if he is taken several times in fairly complicated situations. In all cases, it is true that I have succumbed to the charm of this pirate, but between him and Hugh, I’m curious to see what she will do. All sounds very complicated, but we must say that our heroine is accustomed to difficult situations, and the end of the novel puts her in a very difficult position with respect to her future. I can not wait to see what happens afterwards.

I think this volume was a little above the other and all really intrigued me. I was very curious to see what would happen and the author has presented here some very nice ideas. It’s always interesting to follow the Elle’s adventures and I’m curious to learn more. A new good novel.