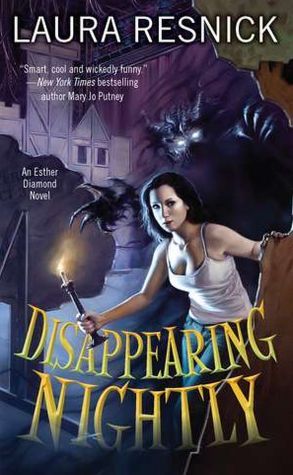 When bizarre magical disappearances disrupt shows around the city, Esther receives a mysterious warning not to go on with her off-Broadway show. Desperate to stay on stage rather than resort to waiting tables, Esther turns to her new BFF, Dr. Maximillian Zadok, a 350-year-old mage whose day job is protecting New York from Evil. Determined to get to the bottom of this mystery without losing her job, Esther and Max team up with a conjuring cowboy, a banker with stage aspirations, and a flock of fearless drag queens. Also on the case is Detective Connor Lopez, a sexy cop who has a thing for Esther, but who fears that she and Max may be a bigger problem than the vanishing performers.

Since the show must go on—and the astronomical rent must be paid—Esther, Max, and their friends pursue Evil to its lair in their fearless determination to find the missing performers and restore harmony to the city that never sleeps.

Review: With the release of the latest volumes and the great covers that come with the series, I was really curious to discover the first novel. I must say that it was nice to have a different environment here, a heroine who is quite normal, an actress who is trying to earn a living. A magic show that will become very important throughout the story and many very different characters who will come together to solve a big mystery.

As I said, Esther is a young woman trying to do her little bit of life on stage, something that is not also very easy. But when in addition to this, the star of the show disappears during a magic trick, the key moment of the performance, the world of the young woman is messed up. Police did not find any tracks and when Esther begins to receive warnings when she is going to become the star of the show, she understands that there is much more than she thought. Oh yeah! Because evil exists in this city and accompanied by an old mage, she will try to understand the reason for the disappearance. It must be said that the whole is even more intriguing when many other magicians manage to lose their assistants in the same kind of shows. Allying all and propelled into a world they do not know about, our characters will try to understand what is happening and try to find the missing persons. But that seems far more complicated than expected.

I enjoyed getting to know Esther even if it’s true that something was missing for her character and I do not know exactly what. For once we have a perfectly ordinary heroine who finds herself thrust into an extraordinary world. She is determined to understand what’s going to keep working. But I must say that this is something new for her and she will put all her skills to the test. She is helping by Max, this man is a little lost in this century with the technology he does not like. He is a mage who does not hesitate to tell his story to everyone. Of course, there are also all the wacky magicians that we discover and who bring a wonderful touch to the story. And finally, my favorite character: Lopez! Ah this policeman is awesome! He has a weakness for Esther even though he knows that nothing can happen as she is suspect in his investigation. I loved his behavior with the young woman. Trying to understand her but he can not ignore his rationalism. Favorite moment? When he talks with his mother on the phone and when he explained to the girl the reason for the insistence of his mother for him to find a girlfriend. It was really funny and I did not expect that at all.

It was a good story even if something is missing for me in a whole. The end surprised me because I did not expect this culprit or that reason. I do not know if I’m really happy in the end but it was still interesting to understand the whole. I do not know yet what will happen in the series, but I think I have to try the second volume to see what happens afterwards. The novel poses anyway well the basics of the characters and I’m curious to see if we’ll see everyone later and what will happen to the young woman.