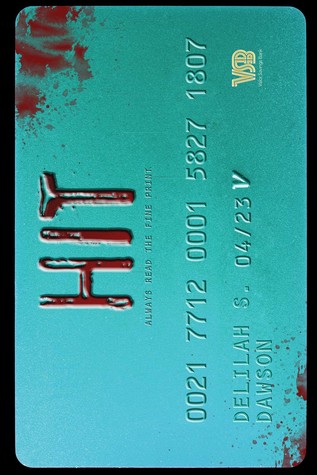 Synopsis: NO ONE READS THE FINE PRINT.

The good news is that the USA is finally out of debt. The bad news is that we were bought out by Valor National Bank, and debtors are the new big game, thanks to a tricky little clause hidden deep in the fine print of a credit card application. Now, after a swift and silent takeover that leaves 9-1-1 calls going through to Valor voicemail, they’re unleashing a wave of anarchy across the country.

Patsy didn’t have much of a choice. When the suits showed up at her house threatening to kill her mother then and there for outstanding debt unless Patsy agreed to be an indentured assassin, what was she supposed to do? Let her own mother die?

Patsy is forced to take on a five-day mission to complete a hit list of ten names. Each name on Patsy’s list has only three choices: pay the debt on the spot, agree to work as a bounty hunter, or die. And Patsy has to kill them personally, or else her mom takes a bullet of her own.

Since yarn bombing is the only rebellion in Patsy’s past, she’s horrified and overwhelmed, especially as she realizes that most of the ten people on her list aren’t strangers. Things get even more complicated when a moment of mercy lands her with a sidekick: a hot rich kid named Wyatt whose brother is the last name on Patsy’s list. The two share an intense chemistry even as every tick of the clock draws them closer to an impossible choice.

Review: I appreciate the novels by Delilah S. Dawson and when I saw the release of this one, I was immediately intrigued. The author is unparalleled to create different and dark atmospheres and she really managed to do something very interesting here.

The world has changed and the United States have discovered the perfect solution to get rid of the debt they have accumulated over the years: Valor National Bank. This company has just bought everything, emergency numbers, police and other important institutions in the eyes of people. That’s where the “suits” enter, the people who work for the bank and now take in account the small characters of the credit card applications contracts to demand all the money that the customers asked them. Our heroine, Patsy finds herself embarked on a crazy story in which she would not have liked to fall. Her mother with debts, she receives the same choice that she must offer the people on her list: to pay the amount borrowed at once, to work for 5 days for the bank as a hitman or to be killed instantly. A very difficult choice… But Patsy wants to live, she wants her mother to live, and she is desperate to keep it that way. Yet she would never have expected to see the persons of her list related to her in one way or another. How is this possible? But in addition to that, she will work with Wyatt, an initially unwanted sidekick but who will eventually become a rock and a pillar in her life. But now, Wyatt also has an interest in this story, and while he works with Patsy, his brother is the last name on the list and he is determined to prevent her from killing him.

We find ourselves embedded in a story where Patricia is trying to become someone she hates and must finally face her past, her desires, her friends and her family. Surprisingly, she will also learn a little more about her father disappeared since her 4 years old. It was interesting to see how people will eventually be manipulated without trying to really rebel. This is one of the things I had a problem with, the inconsistencies about certain subjects. This can range from a lack of data on the past of the characters, the Patsy’s father or even about the actions of the protagonists. We’re even left with a little feeling of incomplete that is quite disturbing because we have many issues in the history and ultimately we really get no response. Maybe is it the goal and we’ll have all that in a second volume but I think it lacked a little something more here.

Patsy is a girl who will do anything to survive and she shows it precisely here even if it is really not easy. I loved that Wyatt was also present for her when she needed it, and yet it’s hard to really trust him because we feel that he’s hiding something without really understanding what it is exactly.

In any case I still had a good time and I’m curious to read more to have all the answers to my questions that I look forward to! Many things that I want to understand!