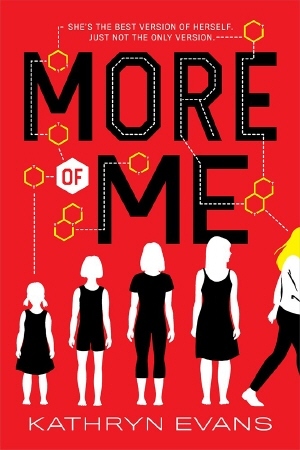 Synopsis: Teva goes to school, studies for her exams, and spends time with her friends. To the rest of the world, she’s a normal teenager. But when she goes home, she’s anything but normal. Due to a genetic abnormality, Teva unwillingly clones herself every year. And lately, home has become a battleground. When boys are at stake, friends are lost, and lives are snatched away, Teva has a fight on her hands—a fight with herself. As her birthday rolls around, Teva is all too aware that time is running out. She knows that the next clone will soon seize everything she holds dear. Desperate to hang on to her life, Teva decides to find out more about her past . . . and uncovers lies that could either destroy her or set her free.

Review: I did not know what to expect when I started this novel. I admit that at the beginning the synopsis left me a bit dubious but in view of the reviews, I could only be intrigued to discover the story. It must be said that the story of Teva can only make us curious with all these ideas!

Teva is not a girl like the others. Outside, she may seem like all the girls but when she gets home, everything is different. Since her childhood, Teva creates a clone of herself every year, leaving a version of herself that will never grow. But here, the latter takes the place of the previous girl in everyday life while all the others are forced to remain at home. Each has different aspirations but their mother prevents them from showing themselves to the world by explaining that they would immediately become guinea pigs and that they can not trust anyone. Alas, it was easier to master young girls, but adolescence is a more complicated age … 15 (Teva at 15 years old), tries to go out and interact with the world as much as possible. She left her boyfriend behind and she can not stand seeing her life scrolling without her. The current Teva (at 16) also tries to control what happens. She hopes to be the last one but knows that it will be a complicated dream. Yet she is also the one who will succeed in discovering the truth about them, about their absent father and who will try to make things change. Yet nothing will be simple.

I found that the idea of the story was truly original and the author writes so well that we get carried away right away by the narrative. We understand perfectly the aspirations of each Teva, to see that they want more, that they only want to live their life. We see the changes of 16, the gradual appearance of the one that will take its place, and the pain of this state.

I really liked Teva and her friends, they are all for her and help her unknowingly through hard times. I admit, however, that I was not expecting it at all and I was quite surprised and sad, but I was still happy with all the changes. A really interesting story!

17 thoughts on “More of Me by Kathryn Evans”