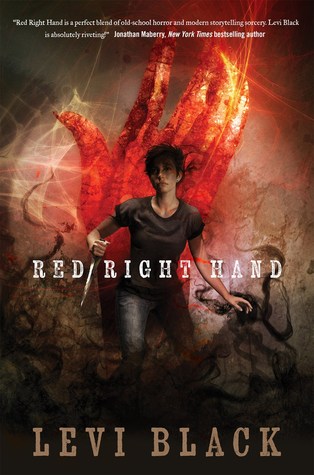 Synopsis: Charlie Tristan Moore isn’t a hero. She’s a survivor. On a night when her demons from the past are triggered, she arrives home to something even more harrowing-an attack by three monstrous skinhounds, creatures straight out of nightmares. She fights but is outmatched. Just as hope seems lost, in sweeps The Man In Black, a rescuer even more monstrous and unlikely, dressed in a long, dark coat that seems to have a life of its own and with a black-bladed sword held in his terrible, red right hand.

Review: I am always interested and fascinated when it comes to demons and it is true that I was curious about this novel and the author as I did not know about her. This book also seemed to present everything that I love with a heroine whose life is turned upside down, demons as I said, action but also and most of all urban fantasy! In the end, it was not necessarily what I expected but it was interesting to discover the history and the characters.

We meet Charlie, a young woman marked by her painful past and who tries to run away since. Difficult themes are also used in this and we can only sympathize regarding what the young woman has been through. We understand throughout the novel that something terrible has happened, causing her to lose confidence in herself, but it’s true that I was really curious to learn about the events. But this is a part of the story as well as her relationship with Daniel that quite evolves during the story, allowing them to have the opportunity to talk about these subjects. I know, I know, I have not yet spoken of the demons but I’m getting there! It’s just that finally the relationship between Daniel and Charlie has something very touching and we follow carefully throughout the story what happens. But thus, the demons, yes because they are coming … well I say demons but they are rather evil entities. But I digress … as Charlie returns home after a disastrous evening, she faces three huge dogs that have only one purpose, to kill her! Fortunately she will be saved by a man, The Man in Black, who wishes to take her as an acolyte (willingly or by force) to help him fight his brothers. No other alternative and with her boyfriend as a hostage, our heroine has no choice but to embark on this adventure and to help him although she does not know if something positive will come out.

I found the interactions between the characters interesting and as I said the relationship and Charlie’s past were fascinating to read … By cons, I had a lot more trouble with the quest they undertake, I didn’t manage to get interested and I found that sometimes it was a little too wacky for me, I really did not expect this. So it’s true that I disconnected over that, which is unfortunate. Yet the ideas of the author are original and we still have a good time but I think I’ll wait for the reviews of the sequels before reading them to see how they are.