We’re happy today to have Cheryse Durrant on the blog for her new release: The Blood She Betrayed

Characters teasing the fringes of your mind

I’ve been tormented by my characters since I was a child.

My sister used to roll her eyes when she caught me having conversations with my heroes and heroines.

It often felt like they and their story were trapped inside me and the only way I could give them freedom was to ‘get them out and get them down’.

Only once I’d channelled their stories onto paper would their spirits release themselves from the deep and often scary recesses of my mind – and not until I gave them a satisfying ending.

This is the plight, I think, of authors everywhere, to be battered and crowded out by vivid, three-dimensional characters that arrive amidst magical cerebral mists, and refuse to leave, even if we ask them nicely.

So when the image and voice of my gutsy heroine Shahkara (The Blood She Betrayed) first flashed through my mind, I knew it would be a challenging journey before I could finally let her go.

Shahkara is one of the strongest, most inspiring, most selfless yet single-minded women I have ever “met”. Her life is pitted by secrets and tragedy, her kingdom devastated by Taloner demons and political intrigue.

But she didn’t want me to write about her murky Gorian homeworld but, instead, her dangerous quest to Earth to find an ancient artefact – the Elnara death lantern – her last hope against the heart-devouring demons plaguing her lands.

Shahkara: A fallen warrior princess, bound by duty, but harbouring dark secrets, forced into a world of breath-taking technology and sinister forces.

Max: A directionless Earthern on the brink of manhood, trapped by his wealthy father’s manipulations, and grieving the loss of both mother and brother.

These two characters cross paths from the very first page of The Blood She Betrayed and their lives are never the same again.

Neither was mine. Maybe Shahkara’s magic will also touch you and you’ll be changed forever.

To celebrate the launch of The Blood She Betrayed, I’m running a Hearts & Talons Tour with prizes including a $50 Amazon gift voucher (drawn October 31) and a $130 9ct gold crystal pendant (drawn November 30).

All you have to do is order the eBook or paperback and email me proof of purchase via cheryse(at)quietdawn(dot)org.

For those who want to try before they buy, they can download the first 12 chapters for free from Clan Destine Press right now: http://www.clandestinepress.com.au/content/free-12-chapter-teaser-blood-she-betrayed 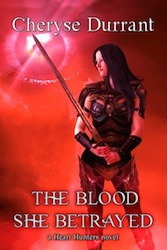 Blurb to The Blood She Betrayed:

To save her kingdom, she must betray her blood…

Thrust into the technology-driven Earthlands via magical mists, Shahkara is forced to rely on Max McCalden to help search for the ancient Elnara death lantern, her homeworld’s last chance of survival against the heart-devouring Taloners.

Max has his own problems – a manipulative billionaire father, a murdered brother – but nothing prepares him for this fugitive warrior’s razor-sharp talons and magical abilities.

Shahkara’s half-Taloner blood demands what she knows she can’t have – a human heart. She longs for love, but as deadly enemies attack at every turn, will her lust for Max destroy them both? Or will she find the strength to free both worlds from a threat more horrific than the demons that share her blood?

The Blood She Betrayed will be available from all good bookstores, Clan Destine Press, Amazon, iTunes and Kobo, from October 16.

Cheryse Durrant grew up on a farm near Roma, Australia, where she regularly created bunyips and other imaginary characters.  She wrote her first story on her aunt’s bedroom wall but it did not attract the literary acclaim she deserved. She worked as a journalist for 15 years before trading her soul for fiction. The coffee/chocolate/strawberry addict now lives at Bargara on the Central Queensland coast, with her beach cat Scamp and sexy geek husband Shane.