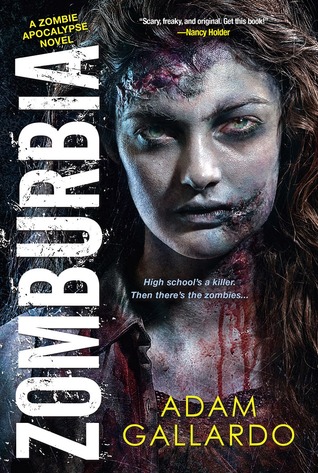 Synopsis: My name is Courtney Hart, and I’m here to tell you about things that suck. Being born in a podunk town like Salem, Oregon, for one. Living in a world infested with zombies? That, too. And the meat heads I go to school with? I think I’d actually take the undead over them most days. But I have a plan to get out of here and move to New York. I just have to keep selling Vitamin Z along with your fries at The Bully Burger. The secret ingredient? Zombie brains.

I’ve noticed things are getting even worse lately, if that’s even possible. The zombies seem to be getting smarter and faster. If I can avoid being arrested, eaten by shufflers, or catching the eye of some stupid boy, I should be able to make it through finals week still breathing. . .

Review: Ah this book! I expected a lot of it. I love stories about zombies even if I do not read a lot of them and when I saw the book, I thought it was the opportunity to return to the genre. Then did you see this cover? I loved it immediately, it sets the mood of the book.

We find Courtney, a young girl who tries to live as best as she can in a world infested with zombies. She is not very popular in her school and sells Vitamin Z, a drug made ​​from zombie brains putting people in very different states. However it is also a very fast additive drug and Courtney knows it, however, she needs to do that to be able to pay for her education in New York that she expects to start the following year. It is in this context that she meets Brandon, a trendy boy who seems strangely attracted to her and determined to see her succumb to his charm. But Courtney must also take care of her friends, death and of course some of the strange behavior from the zombies.

As I said, I was excited to discover a new book about zombies but I think I expected too much. Several points have to be noted but I will first tell you about the things that I appreciated. Well of course there is the world and the zombies in fact. I found them interesting and it’s true that I was curious to understand their behavior. We can read the story quickly and the author’s style is very nice. In addition, the characters are all so different and intriguing to discover but I struggled to connect with them or even understand them. They act strangely and we really do not understand why. Courtney made ​​many pretty terrible things, but she doesn’t have any problems about that because everybody loves her too much for that. While she is implicated (although by far) on several dead, I felt that after a moment of sadness, she managed very quickly to leave it apart by accusing the others. But she does act like that quite often I have to say and she does not really take the right decisions. Speaking of the dead, I must say I was quite surprised. I understand that the author would like to kill two prominent figures of 4 but I found that there was too much inconsistency in this regard and this is reflected in the story as it becomes a little surreal for times.

To conclude I was a little disappointed by the story itself, and if a sequel comes out, I’m not sure I’ll read it. The ideas are good but I think some tracks and choices were not for me.

31 thoughts on “Zomburbia by Adam Gallardo”