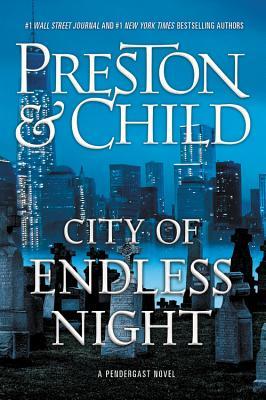 Synopsis: When Grace Ozmian, the beautiful and reckless daughter of a wealthy tech billionaire, first goes missing, the NYPD assumes she has simply sped off on another wild adventure. Until the young woman’s body is discovered in an abandoned warehouse in Queens, the head nowhere to be found.

Lieutenant CDS Vincent D’Agosta quickly takes the lead. He knows his investigation will attract fierce scrutiny, so D’Agosta is delighted when FBI Special Agent A.X.L. Pendergast shows up at the crime scene assigned to the case. “I feel rather like Brer Rabbit being thrown into the briar patch,” Pendergast tells D’Agosta, “because I have found you here, in charge. Just like when we first met, back at the Museum of Natural History.”

But neither Pendergast nor D’Agosta are prepared for what lies ahead. A diabolical presence is haunting the greater metropolitan area, and Grace Ozmian was only the first of many victims to be murdered . . . and decapitated. Worse still, there’s something unique to the city itself that has attracted the evil eye of the killer.

As mass hysteria sets in, Pendergast and D’Agosta find themselves in the crosshairs of an opponent who has threatened the very lifeblood of the city. It’ll take all of Pendergast’s skill to unmask this most dangerous foe-let alone survive to tell the tale.

Review: I had a good time with the previous volume but I must say that I was completely carried away by this 17th novel. How to put it down before finished? This is an existential question because, for my part, I had a lot of trouble and I was eager to discover more! The authors manage perfectly to keep us in suspense until the end of the story!

Pendergast is trying to cope with the latest events with difficulty, and yet here he is again in a new affair that will need his enlightenment, accompanied by Lieutenant D’Agosta! A killer is in town and he seems to target wealthy people and to behead them. Nobody knows if the killer is one and the same person or if they have a copycat. Finding even one clue is almost impossible, so when people press the police to find a link it’s all the more complicated. Our two investigators will have to team up and especially dig their heads to try to understand what is happening and especially to stop the killers!

I found that the investigation was really well conducted, I had trouble finding the motives for the murders or even the identity of the culprit. There are several reversals of situations that I did not see coming and I must say that I was completely caught up in the story. I also found the end touching and I’m curious to see what will happen. The duo of author has once again managed to conquer me and I am impressed when we know that it is the 17th volume!