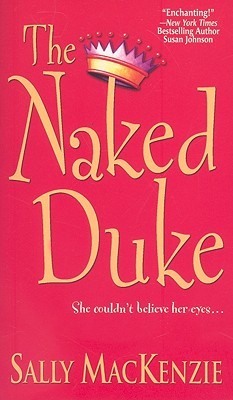 Synopsis: The Surprise Of Her Life

Sophisticated. Scandalous. In fact, Miss Sarah Hamilton, a proper Philadelphian, finds London society altogether shocking. How can it be that she has awakened from her innocent slumber to find herself in bed next to a handsome–and exceedingly naked–man? The laughing onlookers standing in the doorway are no help whatsoever and surely this amorous lunatic cannot be a duke, as he claims. She is compromised–though she most certainly will not marry him!

The Sweetest Moment Of His

James, the Duke of Alford, is enchanted by his unexpected bedmate–and not at all afraid of her pink-cheeked fury. True, the circumstances and place of their meeting are most unusual, but the spirited American who’s pummeling him with a pillow is an incomparable beauty. If Sarah will only listen to his perfectly reasonable explanation, James is sure that he can capture her heart. . .forever.

Review: I have read many books by Sally Mackenzie, the last of this series and those released in her second series and I loved them all. So when the French publisher has been released a new version of the series combining the first and second book (well it’s the third in English, I know I don’t understand the logic either), I thought it was an opportunity to put myself in the series from the beginning.

The start of the story made me immediately think of Surprising Lord Jack, as I admit it happens in the same way. A girl in a bed, a man who sleeps next to her and in the morning, he decided that the best thing to do is to marry her when of course the woman doesn’t want to. But the comparison stops there. In fact, Sarah has just returned from America to find her uncle, but she did not expect to discover that he is dead, leaving behind a single son. And it is therefore simply impossible for her to live with him. Then comes into play James, the man with whom she has been compromised and who is determined to marry her at any cost. And while living under the same roof with two chaperones and James, Sarah goes to see her determination falter behind the advances of a man who dreams only of her. I must say that everyone is determined to see her end with this duke. But his debauched reputation is far from reassuring the young lady who has reservations.

I loved this novel, the story between these two characters is really cute. Well it is true that some points are a little hard to believe compared to others but I took a great pleasure to follow this couple. Their romance is not easy, and many obstacles will be on their way, including a cousin of James. It is true that I did not expect to have such a villain in the story, but Sally was very successful in writing a man of the worst kind. And I was really curious to see what was going to happen. I must say that each novel is light and very easy to read, which allows us to read each story with great rapidity.

I really think Sally MacKenzie has a lot of talent in historical romance and I’ll read now the rest of the series. It’s a nice mix of humor, romance and plots. I really recommend starting her books, especially as there is no problem with starting with any of them. 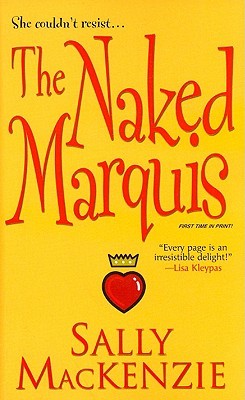 Synopsis: The Man Is Practical
As marriage proposals go, Charles Draysmith’s suit is as romantic as the moors in December. Emma Peterson might be only a vicar’s daughter, and he the new Marquis of Knightsdale, and perhaps he would rather marry her than endure the marriage mart. But when he suggests how much he’ll enjoy securing an heir, well, a lady can only endure so much.

But The Lady Is Passionate
There’s something about a woman throwing pottery at a man that piques his interest. Perhaps his proposal lacks grace, Charles thinks. But it does seem a perfect solution. He acquires a wife; his young charges have the mother they so desperately need, and Emma gains security and position. You see? Simple. Practical. Sensib- oh no, not the ceramic dog…
He will have to confess the truth to calm her down. And the truth is, he’s madly in love…

Review: And here it is the third volume of the adventures in the Naked Nobility series. I still love to this kind of historical romances but I realized that my preference is for the Duchess of Love series as I also very appreciate it.

We rediscover here Charles, the character we met in the first volume. His brother just died in an accident and even if he did not want a title, he is now a Marquis. And of course, he must now find a wife. Something that does not please him at all. But when he returns to his new home and discovers that his childhood sweetheart deals with two daughters of his brother, he thinks it would be perfect to marry her and asks her right away. Emma is in love with Charles since she is 6 years old, and she is also still single after 26 years, which is often an advanced age in this period. Saying that she is shocked when the Marquis offers to marry her after 5 minutes would be an understatement. And although Emma loves him, she refuses to marry without love, even if it means becoming the mother of two young girls she loved deeply. But she is determined, and despite her desire and his incessant demands, our heroine stands firm to not succumb, or just a little.

The history between the two characters is pretty cute and the fact that Charles did not understand what Emma really wants is quite frustrating. But everyone will help them realize this fact, whether the two girls, the Charles aunt: Lady Beatrice or all the Charles friends we met in the first volume. Moreover, we have the chance to see Sarah who is now pregnant with James. I should also add that I loved the children: Isabelle and Claire, as well as Lady Beatrice, they have a lot of ideas of all kinds. Beatrice has a refreshing frankness and does not hesitate to say what she has in mind even if it is often quite indecent. And I really loved that about her! Of course, that’s not all and a mysterious person appears in the story and we wonder throughout the book what he seeks. But we will not know until the end of volume.