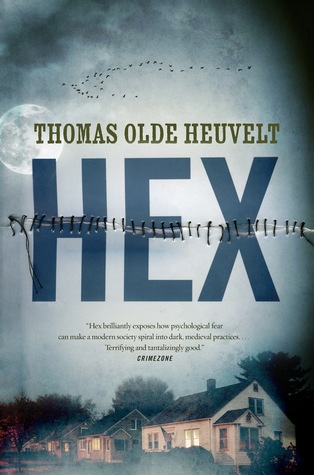 Synopsis: Whoever is born here, is doomed to stay ’til death. Whoever settles, never leaves.

Welcome to Black Spring, the seemingly picturesque Hudson Valley town haunted by the Black Rock Witch, a 17th century woman whose eyes and mouth are sewn shut. Muzzled, she walks the streets and enters your homes at will. She stands next to your bed for nights on end. Everybody knows that her eyes may never be opened.

The elders of Black Spring have virtually quarantined the town by using high-tech surveillance to prevent their curse from spreading. Frustrated with being kept in lockdown, the town’s teenagers decide to break their strict regulations and go viral with the haunting, but in so doing send the town spiraling into the dark, medieval practices of the past.

Review: I had not read a novel like this for a long time. And it’s true that it’s finally a novel of the caliber of Stephen King’s horror novels. Having read the novel in the evening, I can tell you that I was looking around to be sure that the old witch with her eyes and mouth was not next to me.

The city of Black Spring is not like any other city. All the people who come to live there or who already live there are stuck in this city forever and that from hundreds of years. They can leave of course, they are free, but if they remain outside too long, suicidal desires manifest and are increasingly present. But on top of that, the witch rodes, she can manifest herself at any place in town and invites herself into everyone’s homes. It is not something pleasant and it is even rather terrifying. But the city tries to avoid the arrival of new foreigners and even hides the existence of this witch that scares everyone. No one has the right to interact with her, she must be hidden when foreigners come to town, she must not be disturbed … It must be said that the government has tried everything to destroy her, but apart from the appearance of new deaths, nothing has been done.

We mainly follow a family who has lived here for several years. That’s when the problems begin. Indeed, some teenagers have decided to rebel against the rules and to provoke and humiliate this witch.

I really liked the novel that I read very quickly. The author succeeds perfectly in creating an oppressive and terrifying atmosphere. We all wait to see what Katherine (the witch) will do regarding these mockery, and we wonder who the next to fall under his yoke will be… I admit that I did not expect such a turnaround at the end of the novel. I was really surprised.