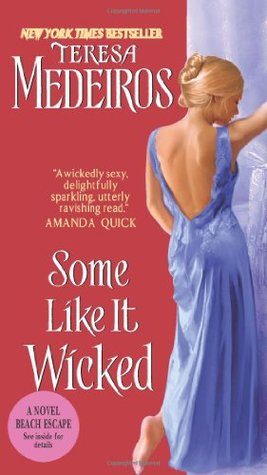 Highland beauty Catriona Kincaid cares nothing for propriety—or even her own safety—when she storms the grounds of Newgate Prison. Determined to return to Scotland and restore her clan’s honor, she seeks the help of Sir Simon Wescott, a disgraced nobleman and notorious rogue. She is prepared to offer him both wealth and freedom, but she never dreams the wicked rake will be bold enough to demand a far more sensual prize.

Simon is shocked to discover the tomboy he met long ago has blossomed into a headstrong temptress. Although he’s sworn off his dreams of becoming a hero, he can’t resist playing knight errant to Catriona’s damsel in distress. Both adventure and peril await them at her Highland home, where they will risk their lives to vanquish her enemies . . . and risk their hearts to discover a passion beyond their wildest dreams.

Review: I do not read many historical romances and I was not particularly attracted by the title but as the author is Teresa Medeiros and as I really enjoyed “Yours Until Dawn”, I was curious to discover another of her books.

Highland Catriona Kincaid is still a teenager when she sees her cousin in the stables with a young officer of the Royal Fleet and a notorious debauched, Sir Simon Wescott. And the least we can say is that there, the young man did not leave our heroine indifferent. Then five years later, the Scottish tomboy she was before has now become a beautiful young woman. But an English Marquis bought the land that belonged to her clan and this man is determined to get rid of the remaining members of the Kincaid’s clan, including Catriona’s brother, Connor. Determined to find him, to recover the land and restore the honor of her clan, Catriona decides to go into Simon Wescott’s cell at Newgate Prison to make him a very strange offer he can’t refuse…

The two main characters are nice, they do not bring anything new to the romance genre but nonetheless, they are endearing. Simon despite his reputation as a rake is not as bad as he suggests he is and even behaves sometimes as a true gentleman. Gradually we discover his past and we understand why he has become that kind of man. Catriona seems to be a very proud and rebellious young woman. She also has a good sense for repartee. However she sometimes shows a great weakness and naivety. By the way I did not quite understand her evasive attitude at the end of the novel during a ball. I had the impression that the only purpose of this passage was to add to the novel a few more pages and in the end I found it completely useless.

Overall I must say that it was a very entertaining read. It was not as enjoyable as “Yours Until Dawn” but Teresa Medeiros is definitely an author that I really appreciate. Her writing style is fluid and very readable so that you can read the entire novel in just a few hours. However the main thing that perturbed me was the fact that this quest the heroine wants to accomplish (ie restoring the honor of her clan) is not further exploited here. Indeed, the novel focuses essentially on the romance between our two heroes and all the rest was somewhat eclipsed. And then I wanted to find out more things about Connor too. Because we can say that he is the big absent of the story! The main characters talk about him throughout the novel and we don’t see him. But don’t panic!! Apparently, Teresa Medeiros chose to keep him for book two and when we see how this first volume ends, I must say that now I’m curious enough to read it! 😀

10 thoughts on “Some Like It Wicked by Teresa Medeiros”