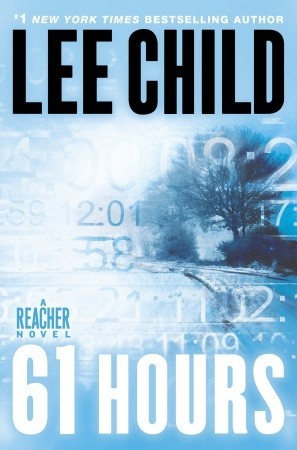 Synopsis: Jack Reacher is back.

The countdown has begun. Get ready for the most exciting 61 hours of your life. #1 New York Times bestselling author Lee Child’s latest thriller is a ticking time bomb of suspense that builds electric tension on every page.

Sixty-one hours. Not a minute to spare.

A tour bus crashes in a savage snowstorm and lands Jack Reacher in the middle of a deadly confrontation. In nearby Bolton, South Dakota, one brave woman is standing up for justice in a small town threatened by sinister forces. If she’s going to live long enough to testify, she’ll need help. Because a killer is coming to Bolton, a coldly proficient assassin who never misses.

Reacher’s original plan was to keep on moving. But the next 61 hours will change everything. The secrets are deadlier and his enemies are stronger than he could have guessed—but so is the woman whose life he’ll risk his own to save.

Review: I have read many books in the series written by Lee Child & Douglas Preston about their Pendergast character and I enjoyed each of them. Yet I’ve never had the opportunity to read a book by only one of them. So when I found this series by Lee Child, I admit that I was intrigued. Good by cons it is true that I start here with Volume 14, but I can tell you that it is really not a problem! Besides, I’m quite intrigued and excited to have the opportunity to read the others now. Looking at the synopsis of the next one, I realized that the novels are not necessarily written in the order, so yes, you can start with this one! But now it’s terrible because I want to read more, but the following events!

Let’s start with the title, 61 hours … Oh yes because it’s really important. The whole story takes place over 61 hours. We indeed discount gradually during the history and we’re eager to see what will happen after that date. It is in this environment that we find Jack Reacher, a man, a former soldier who tries to escape his past, as well as his future and is in a very complex situation. By having a few glimpses into the lives of other characters, we follow this ancient military in an explosive investigation. Oh yes, because while arrived accidentally in a small town, he will have to put his skills to help everyone. Between the control of a witness on tight surveillance, a prison that might help a murder, a biker gang selling drugs, an old abandoned bunker that could be much more important that it seems, Reacher will have many things to do.

I had a great pleasure in following this story, much more than I would have thought I confess. The hero is exciting to discover and to understand. He is very intelligent but does not work to be awarded in any manner, which is quite nice. He will be embedded in this story and will do everything to help the local police while doing it his way. I appreciated seeing the stroke lead he had, how he had to find his answers, as well as his very special nature. Oh yes, because he does not live like anyone else and despite his sense of distance, he is touched by the events. We also have a large number of very intense points about him throughout the story … Yes my heart sank several times for him.

Did I forget to mention the young woman he often has on the phone? As I have loved their discussions! For answers, he contacted his old division, something he has never done since he left the army and that’s how he discovers this young woman. It is through various short dialogues that they’ll get to know and help each other a little bit. But something else appears between them and we will need a little time to learn more about her, as well as Reacher’s, I found that the author was perfectly able to carry his story to reveal information about his characters at the perfect time. But I admit that now I can’t wait about the meeting between the two characters to see what happens then.

I can not say much about the story because many revelations we will be given throughout the novel, linking all the events and allowing us to understand what exactly is happening and it is true that the whole thing was just exciting! In fact, I was very surprised by the culprit of the story, as well as several turns of situation and I think you will be too. I want more!